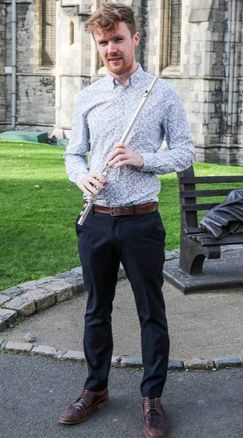 ​Contemporary flautist Brendan Rowan grew up in Co. Meath and first developed his passion for traditional flute while studying with one of the masters of Irish traditional music, Catherine McEvoy. Awarded at both provincial and all-Ireland level, his unique style and flare for Irish Music has established and grounded his playing firmly on a national level.

Brendan also studied the classical flute under the renowned William Dowdall, as a scholarship recipient to the Royal Irish Academy of Music. He is seated as a principal member and is a scholarship recipient of the UCD Symphony Orchestra and has been placed at national competitions on numerous ocassions. Recently, he was publicly announced as deputy flute/whistle player in the Irish Memory Orchestra, where Rowan’s taste for contemporary flute playing was first noted during their 2014 Apprentice Scheme .

Performances in the UK, Sweden, Belgium, and North America, as a soloist and chamber musician, have further developed his international career. At home, Brendan inspires young traditional flute players as a private and group tutor with Ceoltóirí Chluain Tarbh. Brendan is currently a fourth year medical student at University College Dublin, and spent the summer of 2017 completing a research project in cancer biology at Harvard University.